I’ve noticed there seems to be a current trend of fighters seeking to become more competitive by dropping horrendous amounts of weight. Fighters dropping from 185lbs to 155lbs or less when they were already cutting weight to get to 185lbs. I find this a little disconcerting and more so because no one seems to think it’s a problem, when you have people jumping on the scales at weigh ins looking more and more emaciated because of ridiculous weight cutting techniques stemming from bad advice and coaching I find It harder and harder to ignore especially when it reflects not only in their performance on fight day, but also their overall physical and mental well-being.

With this in mind we have to outline the fundamental issue, in this case and in my opinion far too much emphasis is put on major dehydration as the key element to weight loss especially when done only 24hrs before weigh in. We can see in this link a demonstration of how someone like George St Pierre cuts 15-20lbs 5 days before weigh in 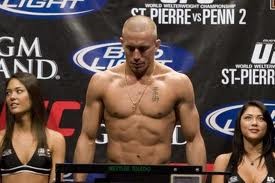 Now, the person in the demo finds it a hard task and for someone that’s not accustomed to cutting weight like this, it will be. However throughout GSP’s whole training camp he only ever cuts 15-20lbs which realistically he could start 2-3 weeks prior to weigh in. Wouldn't this mean certain elements in his diet, carbohydrate,water etc, could be ramped down on a more gradual incline. Surely this would be less of a shock to the central nervous system and certainly less pressure on the fighter mentally as the time constraints are not as severe, allowing for mishaps or any unforeseen issues that may arise during the process. How many times have we seen fighters stand on the scales looking not only physically depleted but mentally exhausted and worried that they may not make weight, the look of absolute relief when they do and the look of absolute disappointment when they don’t, at the end of the day it’s the fighters that forfeit part of the purse if they fail to make weight, not the coaches. Maybe a little more emphasis should be put on preparation regarding weight loss and the times involved, then perhaps it wouldn't be such a big surprise when the scales tip in their favour.

We can see from the link above details of GSP’s diet and methods of weight loss.
By this example we can see a fighter’s successful training camp and weight loss regime when the fighter himself stays within 15-20lbs of his fight weight. Although the methods are questionable, this situation is much more favorable as there is less physical and mental pressure and less of a stressful environment for the central nervous system to cope with during training. 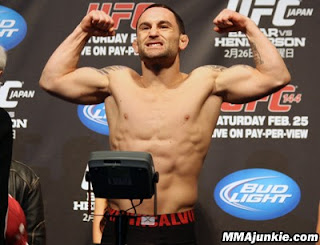 Another example worth mentioning would be Frankie Edgar. He chose a weight class that was perfect for his physical predisposition barely having to cut weight at all to enter at 155lbs which reflected awesomely in terms of performance, recovery and essentially success, the pinnacle obviously being when he won the lightweight title.

So maybe we could consider the ‘norm’ for most fighters to be somewhere in the range of anywhere between 10lbs to 20lbs or maybe this is just the cutting range that a fighter can still function optimally in a fight with the current methods of cutting in mind , however, there are a few exceptions and this is what I think needs to be addressed.
http://www.cagepotato.com/five-of-the-worst-weight-cuts-in-mma-history/

Here we can see some examples of weight cuts gone wrong, to the point where one of the people mentioned, Rory Markham, actually suffered from lung failure due to a drastic and very ill advised cut. Also, how often have we seen Anthony Johnson miss the mark when the time comes. I don’t know how they can describe him as a massive welterweight when he struggles so much to make that weight. Anyone that has to drop 40-50lbs to make weight really needs to reconsider the options.
This is a prime example of how these fighters, (either themselves, or more than likely under the coercion of a third party i.e coaches, managers or even the pressures of having to be competitive) will go to any lengths to gain the advantage in the cage.

So, whats the solution.?

I think it’s only human nature to look for the quickest and easiest way to gain advantages in competition. Although, sticking with this mentality and the methods they use in regards to weight cutting it’s only a matter of time before something goes wrong, and in a sport ( especially UFC ) that is yet to be tarnished by serious injury or death it will only take one incident to make people, press, athletics commissions and politics question the ethics of it and throw the whole thing into disrepute.
With this in mind then how realistic would be to regulate the weight classes a little more, inevitably reducing the risk not only to the fighters but the sport as a whole. Perhaps also leading to evening out the numbers in each division.
This could be determined in a number of different ways, for example, by weight itself, if a fighter has to drop more than 15-20lbs then should they be forced to reconsider the class they have entered into? After all, keeping within 15-20lbs of their fight weight is only going to make things easier not to mention giving their career longevity. Isn’t that what everyone wants?
One thing in particular that I find a little ridiculous is fighters (and there are a few) that are, in my opinion, far too tall for the division they choose to fight in. Guys that are 6ft plus fighting at 135-145lbs just doesn’t make sense to me. So would height restrictions on weight divisions be the way to go? Would that be fair? It doesn’t really seem fair to me for a person that’s 6ft plus entering a division where he knows the majority of the opponents he will face will be 5-6 inches or more shorter than he is giving him a clear height and reach advantage. Consider this, and it becomes pretty clear what their agenda is, regardless of the consequences.


I realize there is a lot of different variables when it comes to genetics and these guys are generally, genetically predispositioned with ectomorphic body types. However with the right direction there is no reason why they cannot effectively put significant amounts of weight on in order to compete at a healthier level in a more suitable category. To have someone that is already very lean with minimal body fat not only depleting themselves to the point where they suffer the serious side effects of dehydration but also sacrificing healthy muscle tissue from the effects of malnourishment, this isn’t efficient or productive and is crucially detrimental to their mindset and physicality. It astounds me that there are fight teams, coaches, trainers, or even organisations that insist they have their best interests at heart but still allow them to do this time and time again in complete disregard for the effects it will have on their short and long term health.

Richard
Check out www.cjscombat.com for training tips and more articles
Posted by Unknown at 09:53